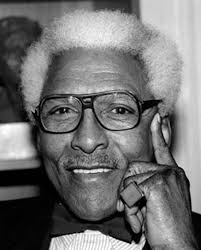 – by Reverend Irene Monroe
.
Each year, the City of Cambridge GLBT Commission presents the Bayard Rustin Service Award to a person of color for their work on behalf of the LGBTQ community. This year I am honored to be the recipient.

While Rustin, inarguably, is one of the tallest trees in our forest, he’s still largely an unknown due to the heterosexism that canonized the history of last century’s black civil rights movement.

For 24 years, however, the AIDS Action Committee of Massachusetts has held their annual Bayard Rustin Breakfast, recognizing Rustin’s contribution and honoring communities of color fight against HIV/AIDS. The Breakfast has become an African American LGBTQ tradition for Greater Boston.

In February 2012, “State of the Re:Union,” a nationally aired radio show distributed by NPR and PRX, was awarded first place in the Excellence in Radio category from the National Lesbian & Gay Journalists Association, recognizing the Black History Month special titled “Bayard Rustin – Who Is This Man?” In March 2012, LGBTQ communities around the country celebrated Bayard Rustin’s 100th birthday anniversary.

Sadly, most Americans have never heard of this man.

Born March 17, 1912 in the Quaker-settled area of West Chester Pennsylvania, one of the stops on the Underground Railroad, is Bayard Rustin’s beginning. A handsome six-footer who possessed both athletic and academic prowess is most noted as the strategist and chief organizer of the 1963 March on Washington that catapulted the Rev. Dr. Martin Luther King onto a world stage. Rustin also played a key role in helping King develop the strategy of nonviolence in the Montgomery Bus Boycott (1955-1956), which successfully dismantled the long-standing Jim Crow ordinance of segregated seating on public conveyances in Alabama.

One of my favorite quotes by Rustin is this: “When an individual is protesting society’s refusal to acknowledge his dignity as a human being, his very act of protest confers dignity on him.” For LGBTQ African Americans Rustin is the only open gay hero we have, and for many of us his work and words give us courage to fight homophobia in ourselves and in our communities.

In a letter to a friend explaining his predilection toward gay sex Rustin wrote, “I must pray, trust, experience, dream, hope and all else possible until I know clearly in my own mind and spirit that I have failed to become heterosexual, if I must fail, not because of a faint heart, or for lack of confidence in my true self, or for pride, or for emotional instability, or for moral lethargy, or any other character fault, but rather, because I come to see after the most complete searching that the best for me lies elsewhere.”

During the Civil Rights movement Bayard Rustin was always the man behind the scene, and a large part of that had to due with the fact that he was gay. As Albert Shanker, then president of the American Federation of Teachers and friend of Rustin stated in a review on Jervis Anderson’s biography Bayard Rustin: The Troubles I’ve Seen that Rustin “…was the quintessential outsider—a black man, a Quaker, a one-time pacifist, a political, social dissident, and a homosexual.”

African American ministers involved in the Civil Right movement would have nothing to do with Rustin, and they intentionally rumored throughout the movement that King was gay because of his close friendship with Rustin.

Rustin’s isolation and invisibility are gradually dissipating as more of us come to know the man.

As we comb through the annals of history this Pride Month, I’m honored to have my name mentioned in the same breath as Bayard Rustin let alone to be receiving an award in his honor.